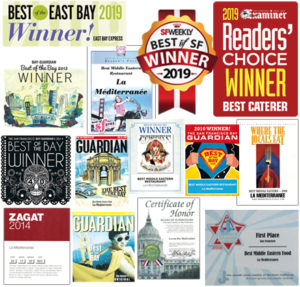 La Méditerranée has been serving award-winning Mediterranean cuisine since 1979. We are grateful to all of our patrons for all these years of good food and great memories.
Here’s a partial list of the local awards and reviews that we are proud to uphold:

The Best Restaurants in America, Where the Locals Eat
Best Middle Eastern 2009

Certificate of Honor, Board of Supervisors, City and County of San Francisco